Should I add Plyometrics into my Boot Camp?

How Long Should a Boot Camp Workout Be?

How Long Should a Boot Camp Workout Be?

How Do You Make Circuit Training More Interesting?

How Do You Make Circuit Training More Interesting?

12 Song Workouts That Are Actually Fun

12 Song Workouts That Are Actually Fun

In our article on what fitness equipment to buy for your boot camp we touched on plyometric exercises. Box jumps, plyo push ups, medicine ball throws, and all manner of jumps, hops, and sprints are all common exercises in boot camps, but should you add plyometrics into your boot camp? Let’s find out.

Plyometrics, or jump training as it is often known, is a form of explosive exercise that is designed to build power and improve athletic performance.

While plyometrics has been around since the 1950s, it wasn’t brought to the West’s attention until the 1980s (it was invented by the Soviets).

It has been used almost exclusively by athletes and sports teams ever since, but in the last couple of decades plyometrics has leaked into regular training. Along with kettlebells, powerlifting, and many other training styles.

Plyometrics is most commonly associated with box jumps, which are everywhere right now. Jumping onto a box is incredibly powerful and has many benefits to strength and power. But we will talk about that in detail later on.

Other examples of plyometric exercise include:

As you can see, many of these exercises are already established parts of boot camp and gym workouts. While others can be easily incorporated. But should they?

First, we will take a look at the benefits of plyometrics, then the downsides. Before examining whether plyometrics really should be part of your boot camp. 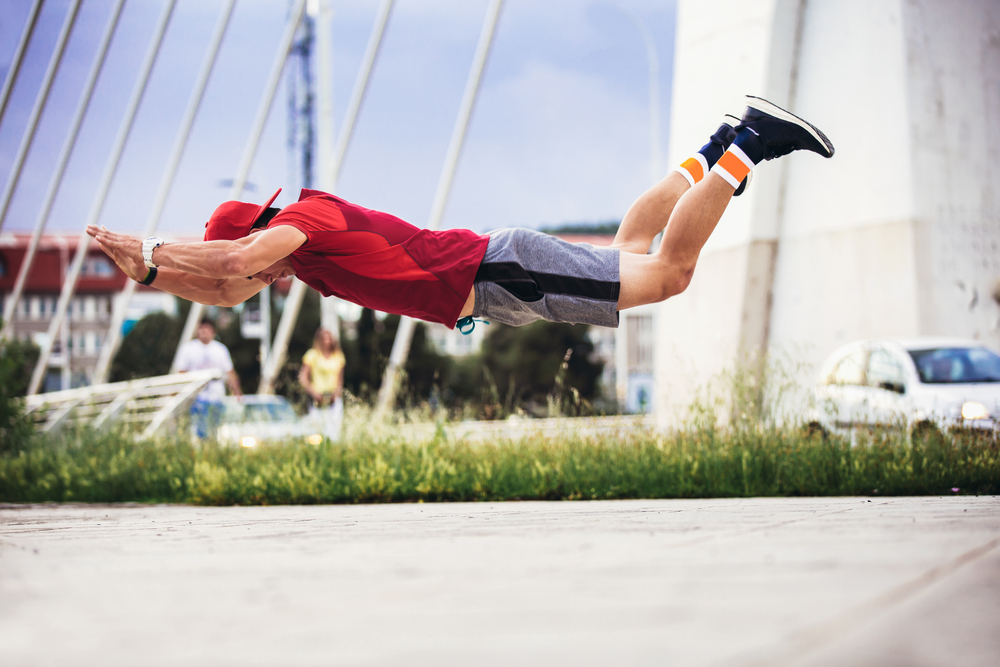 There are many benefits associated with plyometrics, which is why it has been so popular in strength and conditioning over the years. Here are some of the benefits for your boot camp:

While there are benefits to plyometrics, there are also several downsides. While the following downsides shouldn’t necessarily put you off, you should definitely be aware of them before adding it to your sessions.

Should I Add Plyometrics to My Boot Camp?

Now that you’ve seen the pros and cons, you’re probably thinking that plyometrics is not for you. There are benefits, but those benefits are not likely to excite your current members.

However, it is perfectly possible to add plyometrics to boot camps, provided you have the right members in place.

We don’t think that plyometrics should be added to a normal boot camp. Perhaps one or two exercises can be added: squat jumps can be assigned to certain members while the others do regular squats for example. Plyometric push ups instead of regular push ups, medicine ball throws etc …

But flat-out sprinting, agility running, box jumping, depth jumping? Add that to a boot camp filled with 40 year old mums and you’re going to see a lot of unnecessary injuries.

If your boot camp is filled with young men and women who are incredibly fit already then by all means. But even then, you need to decide whether it is in the interests of the group.

Here are some scenarios where a boot camp can benefit from plyometrics:

These scenarios will need to overlap, so you would want young and fit members, who would benefit from plyometrics (through sport or an obstacle course), and you would want the plyometrics sessions to be separate from other training as they are so intense.

How to Successfully Incorporate

Plyometrics into Your Boot Camp

If you’ve decided that you want to incorporate plyometrics into your boot camp then you have two options. The first option is to have a dedicated plyometrics class (which is what professional sports teams and athletes do).

Your other option, as mentioned before, is to sprinkle in a couple of plyometric exercises that are lower impact (medicine ball throws) into your boot camp. Or to only offer them to your fittest members while the rest of the class is doing a similar movement (squat jumps instead of squats).

The second option is probably the more likely scenario for most people.

Some plyometric exercises are pretty easy to coach, and provided the person performing them is injury-free and fit they should be fine to learn.

All of these can be taught easily. Then you’ve got plyometric exercises that look quite easy to do, but can actually be very intense. These exercises should be taught comprehensively, and should not be added into circuits, or used in HIIT or similar.

Exercises such as these are technical, require decent rest between reps, and are solely designed to build power in the lower body. 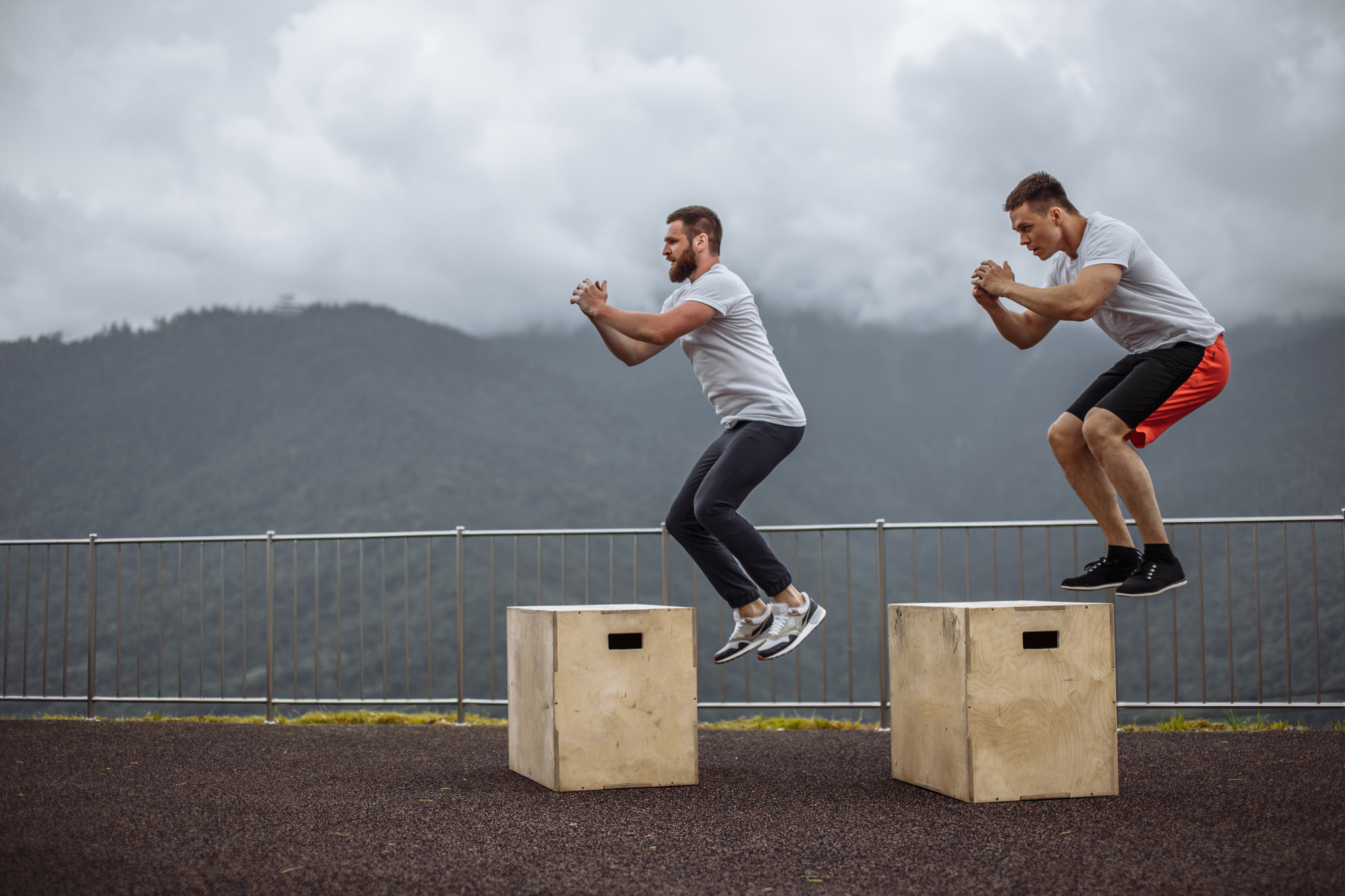 Box jumps are one of the most satisfying exercises to coach, and they are a lot of fun to perform. It is therefore no wonder that you see them being used in boot camps, CrossFit sessions, and HIIT classes. Well executed box jumps that are programmed properly are a fantastic addition to your training, but sadly, this is rarely the case.

Box jumps are often performed at too fast a pace, with little to no rest between reps (yes, reps!). The boxes used are often too tall and can result in acute and/or chronic injuries.

How to Perform a Box Jump

Start off with a box that is a comfortable height for you to jump on. Stand in front of the box with feet shoulder width apart and arms out in front of you.

If the box makes a loud noise when you land on it, then you are not jumping correctly. Either lower the height of the box, or rest more as you may be fatigued.

Once you have landed, carefully climb off the box. Do NOT jump off the box. This is the most common mistake with box jumps. People jump on the box, jump off, and then jump straight back on again. This is not a good idea as it can increase the risk of injury without providing any real benefits (other than cardiovascular).

Should I Buy a Plyo Box?

If you are planning on teaching plyometrics properly, then by all means purchase a plyo box. They are fantastic! Good durable quality, excellent for box jumps, depth jumps, and hundreds of plyometric drills. They can also be used for step ups, and the heavier ones can be used to hold onto for tricep dips or mountain climbers.

If you don’t want to teach plyometrics but just want to add in some box jumps, then we’d probably recommend you reconsider. The risk reward ratio for this bootcamp exercise is not in your clients’ favour, and you have to ask whether it is worth the financial investment for you.

Bottom Line: If you are serious about coaching plyometrics then a plyo box is 100% worth your money. If you just want a fun exercise for your boot camp then we’d recommend against using it.

Q. How many reps should I do for plyometrics?

Lower rep ranges are suitable for plyometrics. Sets of 6-10 reps work well. You need time to recover, think of each rep as a mini-set. You’re putting everything into each rep, so you don’t want to be performing too many. Quality is much more important than quantity.

Q. What age should you start plyometrics?

Kids do a lot of plyometric movements anyway. Skipping, jumping, hopping etc … But structured plyometric sessions may be too intense for them. Let your kids perform these movements naturally as soon as they are ready, but proper plyometrics should be performed when the kid has at least hit puberty.

Q. Should you do plyometrics before lifting?

No, not in our opinion. Treat plyometrics like you would a heavy deadlift or squat session. Keep them separate. Pre-fatiguing the muscles is a common reason cited for performing plyometrics before weights, but this doesn’t hold water. You’re just going to ruin your lifting session.

Q. How many times each week should a beginner perform plyometric exercises?

Once or twice per week, with good rest in between should be more than enough. But this depends on the rest of your training program. If you are lifting heavy weights most days, then you may only need one session per week.

Plyometrics requires a lot more recovery than most other forms of training, and beginners will certainly notice this. While plyometrics doesn’t create the same level of DOMS as a weights session, muscular fatigue is much more noticeable.

The best thing you can do is think of plyometrics as a form of heavy lifting. Treat it with the same respect you would treat a loaded barbell. Don’t overdo it, don’t casually drop it into a session, and don’t use it unless you have a good reason to.

Plyometrics is fantastic for athletes looking to perform better in their chosen sport, but it is pretty useless for weight loss.

So, you have to ask yourself, what are the goals of my clients? Do they want to perform better in sport, or do they want to look good in jeans? For most boot camp members, it will be the latter. You should therefore prioritise this as part of your programming.

If you still want to teach it, then we would suggest doing a bonus class once per week. That way you can earn more money, teach a smaller group (who all have the same goals), and really focus on technique. This will give you and your members the best of both worlds.

Have You Tried Our Group Fitness Workout Builder?